Aragon Online was written by the authors of the award-winning game Sword of Aragon, Russell Shilling and Kurt Myers, with significant contributions by Ibrahim Amin, David Baumgart, Chris Crawford and Ian Thompson. See this page for complete information. 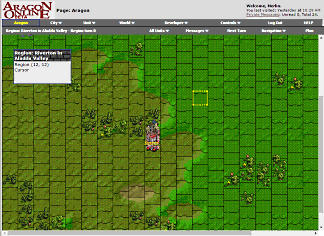 The player character takes the role of the ruler of a small village in a vast world. There are 6 player races (Human, Elf, Dwarf, Orc, Goblin, Ogre) and 5 classes (Warrior, Knight, Ranger, Priest and Mage) that the player can choose to be. He starts out with two follower characters (henchman) and a small army of up to 100 soldiers from 5 unit types (Infantry, Mtd. Infantry, Cavalry, Bowmen, Mtd. Bowmen). Each of the cities vies with the others to attempt to increase their power and influence in the world through Diplomacy, Intrigue and Battle.

The role-playing aspects of the game are implemented with a script system that presents messages to the player, and sometimes presents him with choices that will lead to other messages and consequences good or bad, depending on many possible factors.